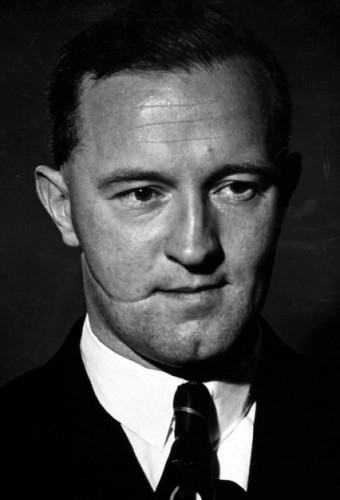 “Germany calling Germany calling!” The distinct voice would crackle over radio airwaves to fellow political dissidents across the U.K. The English voice broadcasting the National socialist point of view during the second world war belonged to William Joyce. The American-born Irishman who grew up in England hosted a well-known radio show after evading arrest to Berlin. Many might not be familiar with Joyce since, during that era, as many heroes were made with greater importance. But regardless of how big or little the role William played during the second world war, one thing that cannot be overlooked or overstated is the inspiring courage and fanatical loyalty displayed by him. A devotion and courage that followed him up the stairs of the gallows as he met martyrdom.

William Joyce’s story is one that I find very relatable to our current situation. It is always easier to be a patriot or nationalist when you have the support of your nation and the people behind you. Not take away from the heroism of the many fighting for Germany and her allies. But, it’s a unique sort of unrelenting defiance and bravery to stand for your ideals surrounded by enemies and traitors. When the society has been twisted on its head and prosecutes those that seek to save it, this is the struggle William Joyce inherited when he took up the nationalist cause in England.

Joyce was not actually born in England but instead to an Irish protestant family in New York City. At age three, his family moved back to Northern Ireland. At the time, hostilities raged between Irish loyalists and Sinn Fein’s. Joyce’s father, fiercely loyal to the crown, passed down to young William, landing him in many fights. Already at the age of 16, with a sense of nationalism, Joyce enlisted in the English army only to be rejected after four months when they found out about his age to join. His family later moved to England, where he enrolled in university. Although Joyce was from a working-class background and could not afford to attend school full time, he quickly excelled in learning French, Latin, and German while also studying history and philosophy.

In 1923 the 18-year-old Joyce joined his first political organization, British Fascist Limited. This was at the backdrop of the rising tide of Judeo-bolshevism that was spilling over from the newly found soviet union. William Joyce quickly made a name for himself in politics for his cultured thug approach. He was a skilled orator and full of passion that showed speaking to crowds or fearlessly confronting reds in all-out brawls. Besides his studies, Joyce also took up sports and was proficient at boxing, rugby, and fencing, making him a fearsome adversary when politics took to the streets as was frequent in those times. On one such occasion, William was surrounded, taking on a horde of reds with a pair of knuckle dusters. A communist jumped on his back, straight razor in hand, and cut the prolific scar across his cheek that would later only serve as a reminder of the hate for his enemies whenever glancing into a mirror.
It was episodes like this that made William even more devout in his ideals as many nationalists do when confronted with heavy opposition. The organization disbanded, and William decided to try his hand with more mainstream politics. He got involved briefly with the conservative party. He recalled about this time, being around men that cloaked their allegiance to international finance with the guise of patriotism made him more repulsed than that of the merchants that pushed communism. William found his way into the ranks of the British Fascist Union under Oswald Mosley. Again his cultured thug style elevated him quickly. He would go on with the British fascist union to give roaring speeches to crowds, reaching over ten thousand. One thing about Joyce that put him at odds with some in the party was his brazenness pertaining to the Jewish question. On one occasion, a Jewish businessman approached William to offer 300,000 British pounds for some subversion. Without consulting any other party members, Joyce sent the jew running out of the office.
It is actions like that which separates Joyce from others with his fanatical devotion. As the B.U.F. Grew, the ruling elite took notice, and with their plans to wage war on Germany, they wanted nothing to get in the way. The ruling parties, the communist, and the media mouthpiece formed an alliance to take down the B.U.F. The media began branding them traitors as Churchill and other politicians lined their pockets for war promises. In 1939 the house of commons was granted emergency powers and began imprisoning nationalist that did not want another brother war for international finance. A friend in MI-5 tipped off Joyce that he was up next. In a rush for freedom, Joyce obtained a fraudulent British passport, took his wife by plane to Berlin, narrowly evading arrest. Two days after they made it to Germany there flat was raided. Although free, Joyce and his wife didn’t have many contacts in Germany and found themselves quickly struggling to get by. Facing destitute, Joyce was considering going back to England to face imprisonment.
He crossed paths with the German foreign press in good fortune, landing a job as English speaking correspondent. He would broadcast a radio show from Berlin to the U.K., suing for peace between the two nations to promote national socialist ideals and expose the warmongers that benefited from deals with the soviets and international finance. As the war came to an end, Joyce made a final broadcast still proclaiming his undying belief for a free Europe. Shortly after the war, Joyce was captured while going for a walk in the woods in northern Germany. William stumbled upon two British officers collecting firewood. At first, Joyce spoke french to them but for some reason seeing his countryman he grabbed a piece of firewood and said in English, “here’s a good piece. ” It was then one of the officers recognized the voice as his show was very well known even amongst the soldiers. The officer that recognized the voice fired a shot that pierced both of Joyce’s legs. He was arrested and brought back to the barracks with his faithful wife waiting at their home for him. She was arrested a few days later, and both were sent back to England as prisoners. On his return, Joyce would become a reprisal symbol and an example of the new ruling left-wing ((labor party)). Of course, the servant media did everything in its power to stir up hate and spread lies, much like we see today for nationalists. The media demanded his blood, and with enough pressure and lies, they would get it. Although William Joyce was an American citizen, therefore, owed no loyalty to the crown, it did not stop the circus trail from overlooking that and hastily try him with the new treason statute that was recently enacted. During the trial, William said in a letter to his wife, ” you may be sure the Jewish interests in this country will make every conceivable effort to liquidate me.” His trial was one of the fastest trials in English history, lasting three months were he was sentenced to hang. On the final day of the trial, Justice Tucker eagerly read off the verdict but never once meeting the defiant eyes of William Joyce has he stood there stoically. He wrote later to his wife that day,” the papers stated my expression was contemptuous. I do believe that I did nothing to shame me in the eyes of my lady. Therefore, I am content”. In his cell as he awaited his day in the gallows and despite the danger of association, Joyce was far from alone in his beliefs as letters poured in of support.

“I am completely at peace in my mind, fully resigned to god’s will, and I am proud of having stood by my ideals to the last” Joyce would go on to say ” It is the force of my ideals that the Hebrew masters of this country fear, for almost everything else can be purchased.” I find this last line to ring true, in our consumerist society, the only ones left are us that hold on to our ideals no matter the price. This is a source of strength our enemies could never understand. That is why they fear us; that is why they wish us gone. But ideals are eternal and will live on long after us.

The white nationalist Martyr William Joyce met the gallows on September 3, 1946. After the execution, when checking his cell, they found a swastika scrawled on the wall with the words “we remain” under it. The media would go on to try to turn Joyce’s broadcast with mockery. They claimed no one listened and branded him “lord haw haw,” but the fact that every single media outlet and the ruling party spent untold energy calling for his blood shows how effective he was.

” I am proud to have died for my ideals, and I am sorry for the sons of Britain who have died in a war without knowing why” – William Joyce, 194