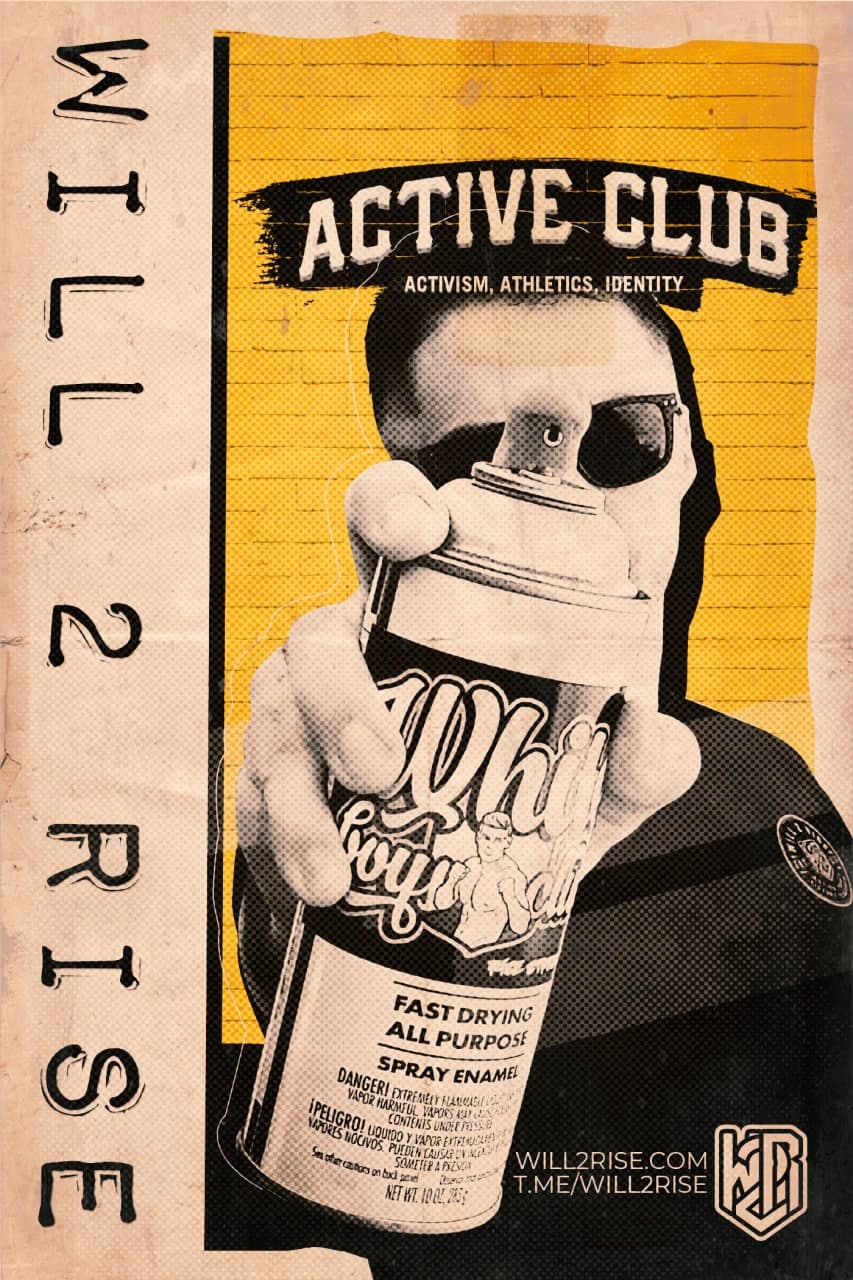 By, Active Club and R. Rundo

The fateful convergence of Trump’s 2015 primary run with the rising of White consciousness is a subject that has been oft-discussed and analyzed in both pro-White and anti-White media. The consequences of existing largely as just another faction in the political cable news cycle have been far-reaching. In 2022, WN 3.0 is no longer saddled with the outdated playbook of a movement designed to support a single candidate. However, the mental framing of the pro-White movement as “a political thing” has been hard to shake in the minds of local crews and individual activists on the front lines of the information war. Most flash mobs and banner drops, effective and inspiring though they are, focus exclusively on political issues of the day. Patriot Front has had some success joining forces with the March for Life, and some excellent banner drops addressing the immigration issue by other crews have had measurable positive impacts. But as WN 3.0 continues to expand in the areas of art, music, literature, and culture, the avenues of attack for crews looking to swell their ranks with new comrades are increasing exponentially. No longer must Trump rallies and conservative groups be the sole target of activists doing outreach. Music, sporting events, and other big cultural events can be targeted with messages of White awakening. Truly creative and cutting-edge activists will find ways to exploit this new tactical advantage and take the pro-White message to new arenas. No longer just political activists in the vein of some campus group taking surveys, with this new approach our crews would become multifaceted propaganda artists engaging in a truly sophisticated guerilla marketing campaign.

When political factions are targeted with our message, we often compete with established and antagonistic parties for a finite pool of recruits. Messages targeting, for example, a hockey game will reach people who are primed to receive our message but are more likely to be apolitical and thus untainted by prior allegiances. Activism at events like concerts, NASCAR races, and local festivals are also much more likely to reach young and active people. These demographics are far more likely to become useful members of a WN 3.0 activist crew than the predominately older people who attend political rallies. There are also many more ways to establish rapport with the audiences of these events than hot-button political stances.

WN 3.0’s strong emphasis on fitness, self-improvement, and brotherhood offers tools of persuasion that are completely immune to preconceived political bias. Flyers and stickers extolling these virtues could target boxing and MMA tournaments, gyms, and motocross courses. A different campaign by the same crew could focus on the art and aesthetics of our movement, and take place at an art exhibition or a coffee house open-mike night. Ground-level intelligence collection might then inform that same activist crew that changing demographics at a local high school have led to gang-beatings of minority White youth. The cunning and resourceful activists see this news as opportunity for a campaign focusing on the importance of a Brotherhood of young White men having each other’s backs. By freeing their minds from the depressing carousel of face-value national politics, WN 3.0 activists discover an endless variety of options for outreach and awakening.

The strange phenomenon of “alt lite” white youtube rappers like Tom MacDonald shows that the apolitical mass of white youth are increasingly comfortable identifying as White in a positive way and exploring what that identity means to them. Rather than letting entertainers have the final say on the topic, activist crews can use them as gateways to holistic and uncompromising White positivity. How this happens is up the local crews, but these kind of opportunities and arenas cannot be passed up in favor of the same old strategies. We would encourage all our readers, supporters, and comrades to attend the events put on by such artists as Tom Macdonald where opposition to Liberal cultural norms is accepted so that they can spread the Nationalist message and interact with average white youth. Even a tom McDonald’s or country singers concerts would make a good target for nationalists to reach white Americans. This could take the form of stickering the area the night before an event as much as it could handing out flyers and engaging in conversation with the attendees of said event. Activists need not target those individuals, collectives, and events that are already politicized. We as Nationalists can bring the Message to our people in all places and at all times.

While the aesthetics of WN 3.0 are fresh and modern, the method of total cultural outreach has proven successful in the recent past. The Skinhead Scene in America made waves with a subculture that promoted strength and masculinity using its aggressive Rock Against Communism music shows. In Europe, Casapound puts on Fascist Rap Concerts, and the Ukrainian scene is no stranger to National Socialist Black Metal Festivals. You can’t build a culture without a level of fun, refreshment, and pressure release. Nationalists in America and elsewhere must inscribe on our banners the slogan of our past German comrades: Strength Through Joy!

Important and laudable efforts exist in the broader pro-White movement to compete with the machinery of old-school political parties. An activist can support these efforts while still recognizing that the strength of the WN 3.0 activist crew lies in its flexible, fluid, and anonymous nature. Planting the seeds of future global White consciousness requires total engagement with and influence on everyday life and culture. Dedicated, creative, and constant guerilla marketing of White awakening and WN 3.0 values is the highest mission an activist crew can engage in and is its best way to support the efforts of all other facets of the movement. Prejudices about “sportsball”, white rap, and consumer culture should be temporarily put aside or overcome in support of this, the Great Work of our time. Certainly, these facets of global monoculture are a dark and suffocating labyrinth. This only makes it more important that our dedicated activist crews plant a lantern and a map in every corner of this maze so that no White youth might ever be trapped beyond hope.