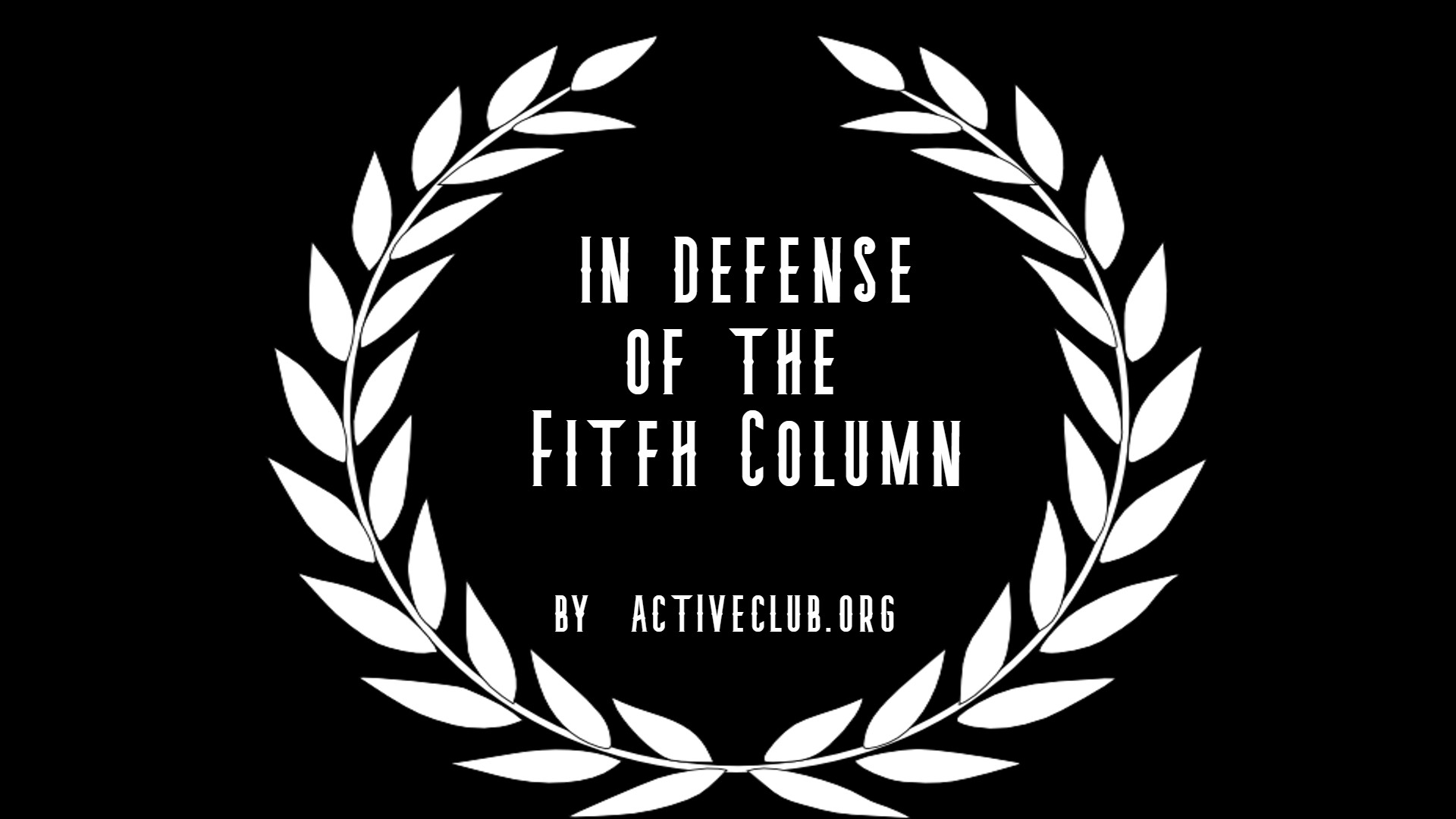 In Defense of the fifth column

On September 30, 1936, a telegram from the German ambassador in Spain sent to his home office in Berlin allegedly quoted Franco, the Spanish Nationalist leader, talking about his planned march on Madrid. Franco supposedly stated that he had “four columns approaching Madrid and a fifth column waiting to attack from the inside”.

Whether true or not, the leftist Spanish Republicans holding Madrid were panic-stricken at the thought of Loyalist factions hiding in their midst, especially among the wealthy and members of the police and military.
They reacted to Franco’s claim with a paranoia-driven fury of slaughter to rival the biblical King Herod, purging faithful Catholics, those of noble blood, business owners, and many others. To this day, the term Fifth Column is commonly used to refer to hidden elements of the population that might undermine the power structure of a nation, and this specter of a secret resistance haunts the nightmares of today’s ruling class.

In a world whose prime directive is the dispossession, marginalization and eventual destruction of the White race, the Honorable Fifth Column of the pro-White movement is any White person who manages to acquire social standing, money, or authority while maintaining in their heart an ember of Love for their own people.

Increasingly, rhetoric from government, industry, and military leadership all sounds the alarm about the danger of “infiltration” of their institutions by White nationalists, and they call for stricter measures to root out and marginalize any White who displays a suspicious lack of self-loathing.
Within the movement, there is some disagreement about the need for a Fifth Column. Some movement personalities have called for activists to divest utterly and openly from any position of standing in their anti-White societies.
But such a complete abandonment of temporal power seems unfeasible for many who consider themselves part of the movement, and in truth is bad for the movement itself.

White Nationalism 3.0 has grown in scope and diversity of operations, becoming a complete culture and way of life for many adherents. WN 3.0 has its own home-grown media, music, art, literature, and culture. This variety of offerings requires a small army of behind-the-scenes volunteers, including videographers, editors, writers, artists, sound engineers, accountants, and countless other support personnel. Without a living that allows them to give that time freely to the movement, much of the content that motivates activists and spreads our message goes away. Other activists with income that allows them to support WN 3.0 operations also cannot afford to be open about their pro-White views, nor can the movement afford to lose their financial support.

A recent incident reveals the danger that still accompanies pro-White activism, and the need for crews to be smart about the risks they take and who is chosen to take them. A WN 3.0 crew met up for a day of sparring, and on a whim decided to place some flyers once the training was over. One of the members present had recently created an LLC and purchased equipment to start a business that would have provided steady employment for several younger members of the crew. The clientele in his chosen industry were very public and generally not disposed to pro-White views, so he chose to remain anonymous in his personal life. During the flyer run, the crew was detained by police for trespassing, and the resulting publicity caused the activist to lose his business opportunity and all of the employment and income for the movement that went with it.
WN 3.0 offers the chance for brotherhood, Initiation, and Ritual that young White men are starving for. It is inevitable that White people slogging through the dark and confusing labyrinth of academia or a major corporation will join WN 3.0 crews and consume our content. On a career path that requires them to constantly bend the knee, accept abasement and insult with a smile, and devalue themselves, a weekend sparring session and some time in the company of like-minded friends can recharge their spirits. WN 3.0 becomes the Pole Star that keeps their eyes above the daily attempts to smother their spirit and gives them a reason to keep building wealth despite the system’s attempts to discourage and drive away all healthy White men. But despite what these “Fifth Columnists” gain from the movement, the advantage the movement gains from them needs to be taken strongly into consideration in any type of activism they are allowed to be involved in.

“Know Thyself” was the first maxim scrawled above the Temple of Apollo at Delphi, and this timeless advice from our ancestors speaks to activist crews today. Each activist should know their own interests, skills, and goals. They should know what they want out of life and how they can best contribute to the movement. And each crew, through Rite, Ritual, and training, should come to know these facts about their brothers. It is imperative that activist crews defend their members’ rights to a freely-chosen personal destiny, their right to reach their highest self, to explore their talents and achieve their goals. They must shield their most vulnerable members from the prying eyes and ears of the army of hall monitors, born snitches, and beggars of system table scraps who scheme to block their advancement.

Against the scope of the technological advantage given to the rat hordes by their masters, the bravery of the WN 3.0 activist who chooses to take a stand for his People becomes undeniable. The media, financial, and technological industries combine in a fearsome hydra that encircles the world, a world-serpent made up of digital networks that rises up in fear to strike the activist down. The very phone in his pocket can turn against him. Against this foe, the activist crews must wield a sharp tactical mind, strict operational security, and the Sacred Silence of the truly disciplined revolutionary, the one for whom honor is measured by loyalty to his comrades.
In the modern and evolving WN 3.0 movement, activism is a never-ending way of life that can take many forms. While striding forth to take action, to keep pushing the message into the real world, to train body and mind for the noble spiritual struggle, activist crews should refrain from passing judgement on members who can better contribute by remaining anonymous and embedded. Indeed, they should defend and shield such assets with discipline, silence, and plausible deniability. Unity of purpose allows for an endless diversity of tactics, and “activism as a way of life” is a philosophy that grants that purpose to the pro-White movement.